Stock losses in the German retail industry rose to 4 Billion Euros in 2015. The major cause for this increase continues to be shoplifting. But more and more organized retail crime (ORC) poses serious problems. This should be a call to action for the loss prevention industry to finally come up with innovative and effective ideas to help retailers.

According to “Stock Loss 2016”, a yearly published study by the German EHI Retail Institute, shoplifting has increased. The German retail industry therefore lost 4 Billion Euros in 2015 – 100 Million Euros more than in 2014. Costumer theft is held accountable for about 55 percent of that amount which corresponds to a total loss of 2.2 Billion Euros. Especially striking is the fact that now organized crime is responsible for the lion’s share of this sharp increase of stock losses in 2015. This statement is reinforced by Frank Horst head of the research area for stock loss and author of the EHI study towards the magazine “Der Handel”. The numbers also align with the German police crime statistics of 2015 by the German Federal Criminal Police Office (BKA) that show a clear increase of reported shoplifting of 7.1 percent compared to the year before.  As reported by the BKA goods worth 250 Mio Euros alone are stolen by strictly organized, highly mobile Georgian gangs yearly. If the financial damage caused by gangs from the Balkans, other European countries and North Africa is added, this number doubles to half a Billion Euros. It is therefore assumed that these gangs altogether are responsible for 25 percent of 2.24 Billion Euros loss caused by shoplifting. 10 years ago employee theft was seen as a far more serious threat by retailers than ORC. As for 2016 this changed since now they feel increasingly helpless and threatened by gang activities as the EHI study found out. Now ORC has become multinational, more flexible, more organized and poses a bigger threat than ever, which is why a clear call to action for effective and innovative loss prevention approaches is urgently needed. 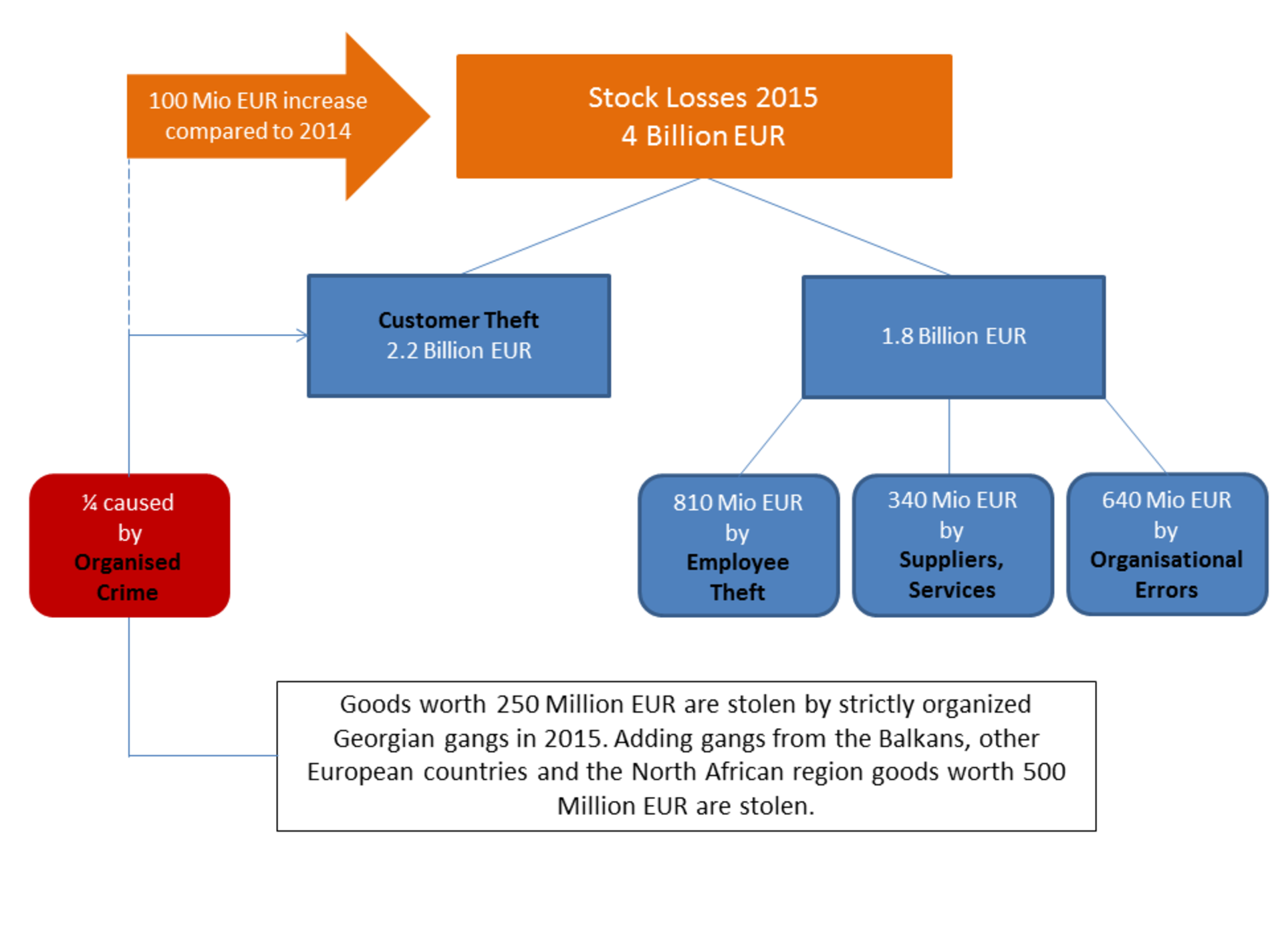 50 percent of “Hot Products” are stolen by professional thieves

What the retail industry experiences at the moment can be fully confirmed by the Berlin company IMCo, a consulting company that belongs to Inventory Systems GmbH, and the studies that the IMCo conducted in the past: already in 2003 it was discovered that professional shoplifters are responsible for a whole of 50 percent of stock losses in 27 branch stores of a leading European supermarket chain over a five-month period. They mainly targeted what are referred to as hot products such as shaving products and color cosmetics.

Picture 2: These Hot Products are stolen the most. ©Inventory Management Consultants e.K.

The company also conducted interviews with shoplifters and gained valuable insights into the motivational structure and criminal behavior of repeat offenders. This work was done in close cooperation with the German police. By statistically surveying offenders, the company acquired a new understanding on how loss prevention measures are perceived and that even professional thieves are highly risk averse. Therefore new approaches were developed so that retailers can face ORC successfully.

The IMCo Shelf System: Stopping thieves before they act

As a consequence IMCo developed an intelligent loss prevention system called “IMCo Shelf” that is tailored to the current needs of the retail industry. The IMCo Shelf consists of two product categories: The intelligent IMCo Hook series and the intelligent IMCo Push. “All detect and indicate product movements with a muted sound. This evidently increases the risk for opportunistic thieves and gangs already at the POS, as our studies in the past have proven” explains Georg Hachmann, Founder and CEO of IMCo. “Often it is the case that if the offender’s confidence is shaken, he or she gives up and leaves the shop. Opportunistic thieves often even end up buying the goods”. The clue about the IMCo products is that they act intelligently in the sense that they register all removals for unusual incidents such as sweeping by professionals. In case of a potential theft a loud alarm directly at the shelf is set off. Optionally sales staff or store detectives can be equipped with a remote alarm. With that the IMCo Shelf system is the only system on the market that alarms the store team right away and that allows a service oriented reaction. The IMCo Shelf system basically makes it possible for retailers to openly display their products while having them fully secured at the same time. It is a scalable, plug and play, easy to use and cost effective system with a fast ROI. The system also can be integrated into any existing loss prevention solution such as CCTV, it works completely wirelessly and has a high deterrent effect.

The intelligent IMCo Shelf System in combination with attentive staff is a successful and cost-efficient strategy that has already proven its worth in practice. It is rolled out and in test worldwide in leading grocery chains and drug stores such as Edeka (GER), Rewe (GER), dm drogeriemark (GER), Rossmann (GER), Müller Drogerie (GER), Meny (NOR), Coop (NOR), Migros (CH), Safeway (USA), Lowe’s (USA), Shoppers Drug Mart (CAN) and Coles (AUS) where it already achieved remarkable results: On average losses go down by 50% and sales go up to 10%.

Although the figures mentioned in this article refer to the German retail market, it is very likely that ORC is posing an increasing problem on a global scale. Now more than ever it is the task of the retail sector to face these challenges and become more flexible, effective and innovative.